Tomorrow's biggest stories in tech and business begin in Paris at VivaTech.

Viva Technology 2021: Big success for the first hybrid event since the start of the pandemic; VivaTech confirms its position as Europe’s biggest startup and tech event. 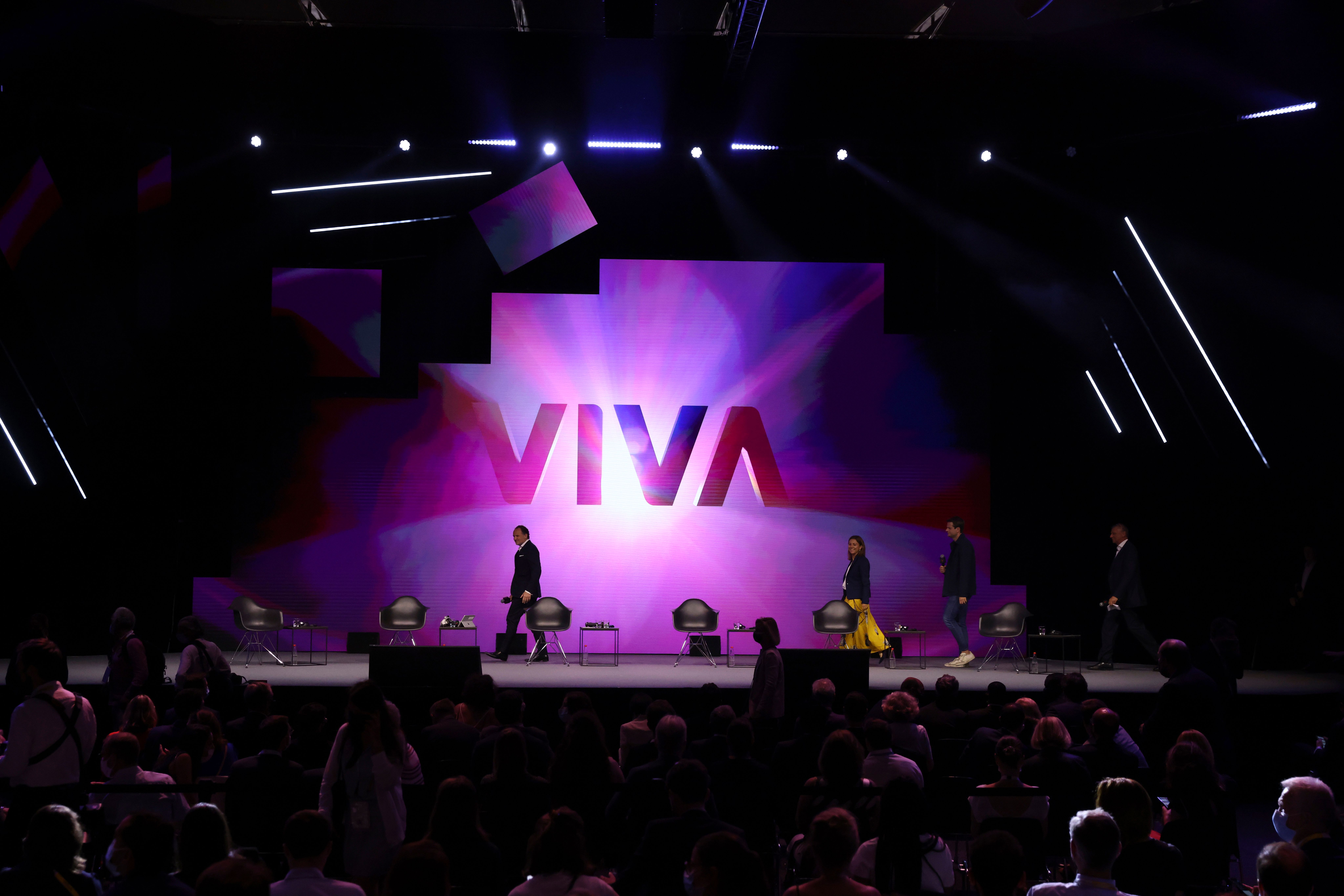 Paris, June 19, 2021 - Viva Technology, Europe's leading event dedicated to startups and technology welcomed 140,000 visitors from June 16 to 19, with 26,000 attending in-person at Porte de Versailles Expo Center in Paris (all attendees were issued a health pass, in compliance with health regulations that limited capacity to 5,000 persons at any given time). An additional 114,000 attendees connected on VivaTech's paid online platform. With significant engagement on social networks, the event reached more than 119 million people in 149 countries generating 1.7 billion views. During these three days reserved for professionals and one day open to the general public, visitors were able to discover more than 500 exceptional innovations, 1,400 exhibitors (60% of which were physical exhibitors), and 400 speakers from around the world.

VivaTech took up the challenge of creating a new hybrid model for events, combining premium in-person access with a fully immersive online experience while at the same time adapting to new ways of interacting.

"VivaTech is back in 2021 with a brand new hybrid format, the first of its kind. The experience, accessible in-person in Paris at Porte de Versailles, and online all over the world on our digital platform, was greatly appreciated by visitors and exhibitors alike. We have reinvented ourselves and redefined the codes of Europe's biggest tech and innovation event. We are particularly touched by the enthusiastic response from all the participants – it was so good to be together, at last. This new format further strengthens VivaTech for the years to come. We also salute the hard work of all the teams and thank our partners for their continued support," said VivaTech's General Manager Julie Ranty with Co-Directors Maurice Lévy and Pierre Louette.

Developed by Inwink, the digital platform was accessed by 114,000 people, 35% of them from outside France.

VivaTech totally re-engineered its format in order to offer     an online experience that goes beyond the simple retransmission of the live event or live news coverage. Drawing on the codes of television and social media, the VivaTech team developed a platform driven by workshops, leader insights and startup pitches.

VivaTech News, the 24-hour news channel launched to coincide with this fifth edition, ran continuously over the B2B days of the event, in English and free of charge, enabling more than 4.4 million viewers around the world to get a glimpse of the breadth and depth of VivaTech's content: on-set interviews, conference debriefs, reports in the aisles... VivaTech News was broadcast on the digital platform, on social networks and on the VivaTech website, as well as on a dedicated DTT channel and on some of the event's partner channels. VivaTech News was produced with expertise from Content Factory of the  Altice Group (BFMTV, BFM Business...), and Publicis Live pulled out the stops to have VivaTech News up and running in just a few months.

Most of the innovations presented at VivaTech were staged online, in an immersive digital experience made possible by the use of 3D/AR technologies and the creation of virtual showrooms, allowing the online audience to explore, discover and interact in a completely new way. For example, the Orange showroom was able to show everyone the various innovative applications and positive impacts of 5G which the company is developing.

The networking system on the digital platform leveraged data-matching (recommendation algorithms tailored to specific sectors, professions and interests) and spontaneous exchanges (random text and video chat modules), enabling VivaTech exhibitors and visitors to initiate 152,000 business contacts that could lead to orders, investments or partnerships, in addition to the business contacts that took place on-site.

Holders of a 2021 All-Content Pass can access all the content and functionalities available on the VivaTech digital platform until November 28, at https://app.vivatechnology.com. For members of the general public, VivaTech is launching a new Replay offer, at the price of 50 euros, in order to allow new visitors to access all VivaTech content.

VivaTech’s online presence was amplified by the high visibility of the event on social networks. A total of 119 million people were reached in 149 countries, including nearly 8 million who followed the event regularly. In total, VivaTech in 2021 generated 1.7 billion views on Twitter, Facebook, Instagram, LinkedIn and Youtube, but also on Twitch for the first time, with the support of Tech de France, NewTech.

MORE THAN 400 TOP-LEVEL SPEAKERS FROM AROUND THE WORLD

The most important figures in technology and business were present at this fifth annual edition of Viva Technology. For three days, 400 entrepreneurs, business leaders, investors and researchers discussed the digital transition and economic recovery. Among them:

French President Emmanuel Macron arrived at VivaTech on the opening day for a session with European scaleups in the company of Denis Ladegaillerie, co-founder and CEO of Believe; Sebastian Siemiatkowski, co-founder and CEO of Klarna; Ana Maiques, CEO of Neuroelectrics; and Giorgio Anania, CEO of Aledia. On the previous day and following several months of consultations, the recommendations formulated by Scale-Up Europe were presented to President Macron at the Élysée Palace in the presence of the members of the initiative. These 21 recommendations were unveiled to the general public at VivaTech on Wednesday, June 16. They are addressed to the ecosystem as well as to European governments and will provide food for thought in the run-up to the French Presidency of the European Union in the first half of 2022.

Viva Technology shares the success of this fifth edition with our major partners. We extend our heartfelt thanks to each of them along with the startups they hosted on their booths at VivaTech.

Founding Partners: BNP Paribas presented more than 40 innovations co-developed with startups from its ecosystem to accelerate the construction of a sustainable economy at the service of people; Google organized, with its major clients, a series of inspiring talks to be discovered online on subjects as varied as data governance, diversity, industry 4.0 or the future of retail; La Poste unveiled its innovations in the fields of AI, health, decarbonized e-commerce logistics, digital marketing, banking and FinTech; LVMH brought together its brands around innovations combining sustainability, digital expertise, know-how and technology, driven by startups from its 5th LVMH Innovation Award and its intrapreneurs; and Orange presented some of the useful and responsible applications of 5G technology along with its strategy of co-innovation with startups.

EXCEPTIONAL INNOVATIONS, SOME PRESENTED FOR THE FIRST TIME ANYWHERE

Visitors were able to discover the latest life-changing innovations (organized by themes such as Tech for the Environment, Tech for Society, Tech to Watch, and Future of Work), presented by major corporations and hundreds of innovative startups, both in-person and also online via 3D/AR simulations:

Some must-see innovations were presented for the first time at VivaTech, among them EZ1 Mobilize - a Renault Group brand; FARM3's Aromaterie (aeroponics, presented in the Discovery by EDF); Wind My Roof's WindBox; the commercial version for Europe of Living Packets' The Box; Hopium, France's first hydrogen-powered car (online); the latest version of the Japet exoskeleton; Huawei's DigiTruck; DTS's controllable robots for disinfecting spaces, the 4. 0 version of the KiwiBot robot (online); the V2 of Bodyo's telehealth cabin; Klaxoon's Hybrid and Hybridity Board; Hover City, the world's first flying, modular and sustainable living units; Heliatek's Heliasol, the flexible photovoltaic surface; and Microsoft Mesh, the new mixed reality platform for users of the HoloLens augmented reality headset.

Many other unmissable innovations were present: Experis Career Accelerator by ManpowerGroup, a GPS for professional retraining; Hipli the reusable parcel (showcased by LVMH); Carbo, which boosts awareness among the general public and businesses to reduce their carbon footprint, showcased by La Poste ;  EHang's first autonomous and electric flying cab; CryoEm, the advanced imaging technology used by Sanofi to determine the structure of proteins with near-atomic resolution; an exoskeleton from RATP; Ruinart Second Skin from LVMH; The SeaCleaners, the flight simulator from SolarStratos. ..

Note that for the first time this year, VivaTech launched its "21 Best" label, which rewards the 21 best innovations presented at VivaTech, selected by six tech experts recognized in their field.

Follow this link to find all the innovations presented at VivaTech 2021.

The FAMAE Foundation has launched the fourth edition of its €1,000,000 global innovation competition to support innovations that have a positive impact on the planet (water, waste, food, housing, energy, mobility);

For the third consecutive year, VivaTech, in co-creation with 50inTech and in partnership with Société Générale, Salesforce, Clear Channel and Axa, has launched the Female Founder Challenge to facilitate access to financing for women entrepreneurs. The winner of the challenge is Clarisse Hagège, founder and CEO of DFNS (France), a SaaS solution for digital asset security that gives banks, investors and businesses the ability to enter the cryptocurrency markets via a state-of-the-art secure infrastructure.

The final of the "Ticket to Space" challenge, organized by Arianespace, rewarded the startup Lunasonde for its project of advanced mapping of terrestrial resources. Lunasonde was awarded a place on one of Arianespace's upcoming rocket launches to implement the project.

The Startup Challenge with UNESCO: VivaTech has partnered with UNESCO by bringing know-how in open innovation and collaboration with startups to three major challenges related to artificial intelligence. The winning startups are Klass, Synthé and Lanfrica.

The fifth edition of the LVMH Innovation Award went to Bambuser, a Swedish start-up that offers a live video shopping platform.

Twitter France, a new partner of VivaTech, hosted #PoweredByTweets, the challenge for creative agencies to reward the most impactful campaigns for NGOs. The advertising credit on Twitter was given to #SkinTweet by @HavasParis for @FondationARC.

The Next Startupper Challenge, an inter-school and inter-university competition set up to promote student entrepreneurship, in partnership with FrenchFounders, with the theme "Tech for Good / impact project", awarded Mouhamed Seck's project, OwnLabs.

The launch of Mega Women & Girls in Tech, the largest intergenerational gathering of women and girls in tech, initiated by Simplon, BNP Paribas and Digital Ladies & Allies to promote existing careers and feminize the sector.

Finally, the launch of the AfricaTech Awards, in partnership with the International Finance Corporation (IFC), a prize to highlight the most promising solutions of startups that contribute significantly to the growth of Africa in key sectors (agriculture, health, finance, energy, retail, and education)

See photo highlights of the four days of VivaTech 2021

WE’LL BE BACK IN 2022 WITH MORE SURPRISES AND INNOVATIONS!

About Viva Technology - In just five years, VivaTech has become the biggest startup and tech event in Europe and is recognized worldwide as a powerful catalyst for business transformation, startup growth and innovation for the common good. Every year, VivaTech brings together in Paris the world's top business leaders, startups, investors, researchers and thinkers for a unique experience combining inspiration, networking and a showcase for innovation. As of 2021, VivaTech has been enriched with a digital platform that brings together an even larger community of innovators. By 2019 VivaTech had already reached 231 million people worldwide, and had brought together 124,000 visitors on-site, among them more than 13,000 startups, 3,000 venture capitalists and 2,500 journalists from 124 countries. The 5th edition of VivaTech took place June 16-19, 2021.

Viva Technology is Europe's biggest startup and tech event. We act as a powerful global catalyst for digital transformation and startup growth. Every year, VivaTech brings together in Paris and online the greatest business leaders, startups, investors, researchers and innovators to ignite positive change in business and for society.

More information on https://vivatechnology.com/media/ and @VivaTech